This weekend I received some news that made me highly excited.

I was told that there is Superman ice cream in Northern Virginia.

What the eff is Superman ice cream you ask? 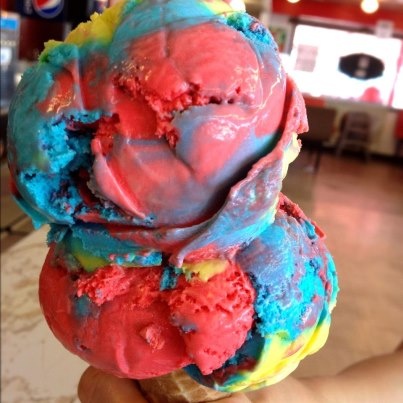 It has nothing to do the actual Superman or DC Comics. Just that the colors are blue, yellow, and red like Superman’s colors. Now that I think about it would be fitting that my favorite flavor of ice cream is geek related.

I first discovered this wondrous creation in a small ice cream shop in southwest Virginia several years ago. Normally I usually go for cookie dough ice cream or cookies and cream. But that fateful day, I decided to try something new and went with this multicolored ice cream without having any idea how it tasted.

It’s really hard to describe how it tastes other than FREAKIN AWESOME. Some people say it’s just vanilla in three different colors. Others say it’s three types of fruity flavors such as strawberry, banana (or lemon) and Blue Moon (no, not the beer). I say that it’s something you have to try for yourself. You may not like it (all those artificial colors, I know) but I think it’s just delicious.

Anyways, other than that one ice cream shop, the only other place I’ve been able to find it was at a ski resort in western Maryland.

(Yep, I know I look rough here. This was after a long, exhausting but quite fun tubing session.)

I was not expecting to find it and of course, I’m the weird person who was geeked to eat ice cream in freezing weather.

As it’s originally from Michigan and normally a Midwest thing, it’s nowhere to be found in stores or in any other local ice cream place I’ve been to. Every time I traveled for work, I would search in vain hoping that maybe one place would have it.

Now that I’ve received rumors that Superman ice cream is somewhat nearby this is the current dilemma. According to Google maps, the place that sells this ice cream is 20 miles away so it’s a 40 mile round trip.

How much do I love this ice cream? Is it worth the trip? So many factors to consider. Do I need to be in this area for anything else? How much is the ice cream? Can take home quantities be bought? Do they even have it in stock? Will it taste as good as I remembered it? Can I convince anyone to go out and get it with me? Do I feel geeky?

This is going to be a to be continued post. I will try to see if I can make it sometime during the summer.

7 thoughts on “For the Love of Superman Ice Cream”