If any of you read my blog post last week on what I was currently geeking out over, you may have noticed that I included a GIF of Josh Groban. And you may have been like, Hmm that’s random. But yes, I am now a Josh Groban fan.

Truth: I have several male celebs that I may fangirl over from time to time (contrary to popular belief Jeremy Renner is NOT one of them). And they may get brought up on this blog. (Hello Hiddles!)

Funny story though, I’m not really into his music quite yet. I’ve actually only really listened to his Christmas album and “You Raise Me Up. ” Maybe eventually I’ll get into the other stuff but that’s for later, not now. In fact last year I was invited to go see him perform when he came to the Northern Virginia area and I was like “Josh Groban? Surely you jest.” I made fun of my best friend for listening to him when we were on a road trip, “Josh Groban, really? You? What?”

Nope, it’s not his not music or even the fact that he’s pretty hot that made me become a fan of him. It’s his wittiness on Twitter. That man is funny. Who knew? (And it’s actually him.) I thought he was just some pretty boy who sang music that made older women swoon. Seriously he’s the type of guy you want to bring home to your parents but if you did, you’d have women from 16-80 trying to attack you for stealing their golden boy. Therefore he must be a clean-cut and slightly boring guy who was just very vanilla.

Not at all. I mean first off, did you see him on The Office as Andy’s brother? Or him on Glee? Or his adorableness when he was very young on Ally McBeal? Ok that’s not really what I was going for. Backtracking…. I remember this video from The Jimmy Kimmel Show that Josh Groban participated in and I was like Oh wow, that’s out of character for him, that’s funny. (Warning that video is not appropriate if you get easily offended, it’s the one about Ben Affleck, so don’t click on it if you do get offended easily) Basically he wasn’t what I thought he was.

So like I said it was his Twitter feed that won me over with examples like these (though you may not find these as funny as I did): 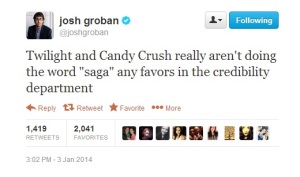 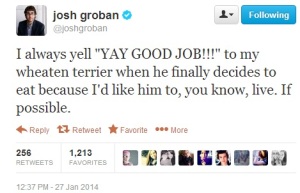 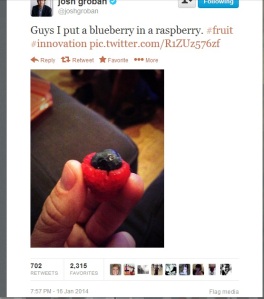 Even the HuffPo thinks that Josh Groban’s twitter feed is awesome as evident here in this article.

I found this Tumblr blog that ALL about him. Basically whoever runs it has been doing it for several years. They post pics, videos, his Twitter posts, basically anything that is Groban related. And through I’ve learned a lot. Like his dog’s name. And the fact he appears to wear a lot of grandpa cardigans. Also his high school pictures. Also that man takes a LOT of posed pictures. If I didn’t know he was a singer, I’d just think he was some fashion model based on how many pics there are of him.

But all that aside, it’s been pretty fun to become interested in someone through their words and wittiness vs what they are really famous for. If I ever got the chance to meet him, I would be pretty cool with telling him that “Hey, you’re a funny guy. Oh you sing too. That’s cool. More wittiness though please.” I think I could honestly say that if Josh Groban serenaded me, I’d be like “erhm, can we actually just talk instead?” Humor and using words well makes someone more attractive and intriguing.