I’ve been dog sitting for my friends over the past week. Their dog is an Airedale terrier named Mario and he’s been great fun to take care of.

It’s also nice having the feeling of owning a dog again even if only on loan. It’s been a while since I’ve been a dog owner (miss you Finn!) but since I am a dog lover, it’s really easy to get back in the swing of things.

Our family wasn’t really a dog family. As we were Asian, having a dog didn’t really factor into the plan of becoming a successful doctor or engineer. Plus my parents didn’t really have pets growing up so the only thing they were comfortable with us having when we were younger were fish (who sadly all died because we never ran the filter in the tank).

Somehow though, the summer between sophomore and junior year, my sisters and I convinced my parents to let us have a dog. My sisters wanted a pug because Nick Carter of the Backstreet Boys had one. Chris Kirkpatrick of ‘Nsync also had one but Nick Cater definitely had more influence on our decision.

We had debated on whether to perhaps get a golden retriever but in the end the pug was the final choice. We finally decided on the name Pugsly Obi Wan Yoda. We got him in 1999 right when after we saw Star Wars for the first time. We also had that Beanie Baby of the pug who was appropriately named Pugsly.

The first day we got him, I remember him being super small and panting a lot. He was 4 months old when we got him. I wasn’t with the family when they went to go pick him up but according to everyone else he was very fast and made his mark by pooping in front of them. The original owners had called him Pistol Pete but we quickly got rid of that name.

Since we were all pretty much dog newbies, Pugsly’s first few days (years) were a learning experience from everyone. We foolishly thought that we could keep him confined to the kitchen for most of his life and only have him go out just for the bathroom. Silly us. That dog ended up ruling the whole house.

I’m glad we got over thirteen years with Pugsly. He passed away last October. He had gotten sick and we could see him declining and knew he was in pain. It was a very hard decision to put him down but we knew it was the best thing for him. Our parents probably will not get another dog again so he will remain the only family dog we will ever have. I myself don’t think that I could ever get another pug, it’d be too much of a reminder though other dogs would be fine.

I realize that pugs aren’t everyone’s cup of tea and that’s ok. I’ve met a few other pug owners and it’s been great being able to bond with them. I will say I don’t like the amount of teasing I get for being a pug lover mainly due to other people thinking pugs are ugly. I do not understand why people do this because I would NEVER tell any other dog owner their dog was ugly even if I did think that. It’s seriously like telling a parent you think their child is ugly. It’s one of those things where you just need to keep your mouth shut especially when you can tell that it bothers someone who you’re making fun of something that they love. Ok aside over.

I know that having a dog is a lot of work and you shouldn’t have one until you’re ready. But if/when you can, they are so worth it. 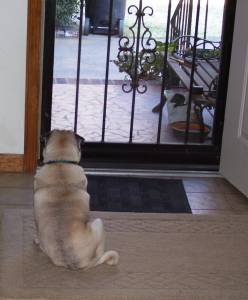