Two months ago I posted about how I was going to be covering The Musketeers for Entertainment Weekly. I was a bit excited yet apprehensive about covering the show. The first show I had done was kinda meh and did not have a large audience at all. This new show I thought would be more enjoyable and with a slightly bigger audience but was it really people’s cup of tea? Would anyone really be interested in it? Would I really enjoy it?

Two months later as we approach the season finale on Sunday night, I’m going to miss this most awesome show until next year. 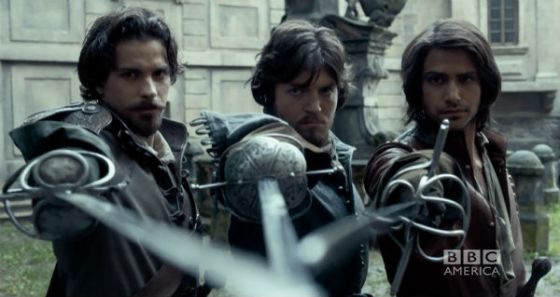 If you’ve been watching the show (or even if you haven’t), feel free to catch up on my recaps on Entertainment Weekly. I also really enjoy comments (hint hint) so if you’re catching up, even ones on older episodes would be great!

A lot of people don’t have BBC America (which is going to be a pain when Doctor Who starts up again on Saturday) so I know that it’s not as accessible as shows on network stations or basic cable. Which makes me quite sad because IT’S SO GOOD that I feel a broader audience would be great for it.

However after talking with folks on Twitter and Facebook, I have yet to come across a person who started watching this show and disliked it. Everyone I know who has had the chance to raves about The Musketeers.

Why have I enjoyed this show?

Because I enjoy the show so much, it’s been actually a bit hard to recap it properly. I fangirl so much while doing it that I have to leave things out and not do so much OMG!!!!!!!!!!!!!! Sometimes my recaps are too long but it’s because there’s so much that’s happening and it seems hard to leave things out. My notes are mostly illegible even to me because I’m constantly having to write down everything and then going back to see how something isn’t really that important.

Peter Capaldi is leaving the show because he’ll be starring on Doctor Who which makes me a bit sad because I’ve really enjoyed his character. He plays him to perfection and I’m going to be wondering what they’ll do to him on Sunday night to replace him. This is a video of him, not acting, but I laughed a lot when I watched it.

If you’re a fan of the men, then you’ll definitely enjoy this video.

It’s been a bit hard to interact with the show and actors on Twitter even though I’m recapping it. The show originally aired in the UK earlier in the year, and while BBC America is promoting it heavily, since you CAN look up to see what happened most of the anticipation is gone. Plus three of the 4 Musketeers (plus Capaldi) don’t have Twitter so that’s been a bummer. I have been retweeted and favorited by several of the actors so that’s been encouraging. Though to be honest, I’m not sure they actually read my recaps. Still I’ll take what I can get.

There are some issues in the show that I find a bit troublesome. I’m not a fan of some of the historical anachronisms such as Milady walking around in public or that some of the female costumes seem a bit too modern. Also, while I know that having affairs was commonplace during that time period, I really am not a fan of how Constance handles her relationship with D’Artagnan and also with her husband. I think (as I said in my recaps) it’s more to do with how they’ve portrayed (or rather NOT portrayed) their relationship and I feel like there’s a lack of a story. It’s also really funny that there are other relationships that I (while again I don’t condone adultery) the chemistry of the characters makes that relationship so much better.

Blips aside, I know that I can’t wait til next year when the second season comes out. I hope I’ll still be covering the show but at the very least I’ll be watching as well. If you’re going to be watching the season finale on Sunday night and are on Twitter, come find me (@beatccr). Hopefully I’ll be livetweeting while watching or at the very least tell me what you thought!

Also…if you’ve read down this far, you’ll be the first to know that the next show I’ll be covering for EW will have another Doctor Who connection. I’ll be recapping Selfie starring Karen Gillan and John Cho. More coming on that soon!