So let’s update on things that have been happening in the last few weeks.

Running – I’m on my 3rd week of running! I’m using the Couch to 5k app from C2KFree and it’s been really helpful. I made myself go over week 1 twice so that I could do a whole week’s worth of workouts without stopping so technically I’m on week 2’s workouts right now. The first day was awful. Even though I work out, I’m not used to running and I basically felt like I was going to die. But I didn’t give up! I’ve been running outside and on the treadmill. I’m not going to be the fastest runner but by George I’m going to keep at it.

Soccer – World Cup is over but I got to go to my first MLS game thanks to one of my friends. We saw DC United take on Toronto FC. Our seats was in the supporters section and those fans are intense! Be prepared to get drenched in beer if DC scores which meant I got covered in beer three times. Michael Bradley from the USMNT was playing for Toronto so that was super exciting.

D&D – We started our campaign and I had a blast! Since we’re playing with a starter set, the story was preset though our DM tells stories very well and can ad lib on the spot. Our adventures went a little crazy because our wizard decided to go off on his own while the rest of us was battling wolves and goblins. Because of his decision we ended up getting attacked by everything in a cave with most of us basically dying before the day was over. I also now have a reputation of being a wolf slayer. There was a room with three wolves on leashes. The wizard put one of the wolves in an enchanted sleep. To save another member of our party, I shot and killed one of the wolves with my bow and arrow. And then I beheaded the sleeping wolf with my sword. Apparently it was pointless and I didn’t need to do it and I killed a defenseless animal. Sigh. I still had a lot of fun and our next session is at the end of month. We also indulged in a bacon wrapped Oreo each.

Wedding – My friends (“Lizzie & Darcy”) got married and it was lovely! I’m so glad to have been a part of it and I cried watching two of my best friends make their love for each other official. I also missed the bouquet toss and most of the dancing but not on purpose. I got roped into helping decorate the cars and it took a lot longer than we expected. I also really liked how the hair dresser did my hair. I asked for a fauxhawk and that’s what I got! 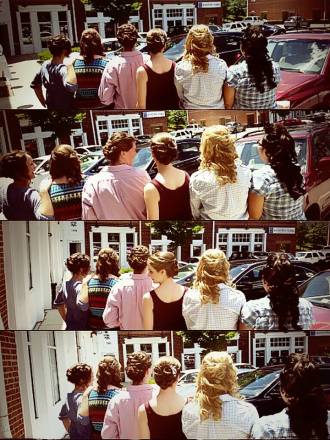 Concerts – I’m going to see Josh Groban next week. NEXT WEEK. AHHHHHHHHHHHHHHHHHHHH. There will probably be another update on that later. Since I’m going two nights in a row, I was told I should bring a sign saying “Josh! I’ll be here tomorrow too!”. I countered that I have a feeling there will be plenty of older ladies doing the same thing as well. Then I was told to add to the sign “And I’m not old either!”

And finally, my recaps on The Musketeers on Entertainment Weekly is still going strong. My latest recap was featured on the main EW.com home page!

So that’s what’s been going on with me. How have you been?