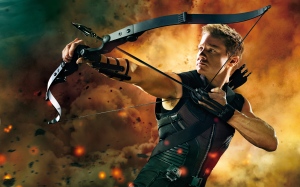 I am a fan of Clint Barton aka Hawkeye, the S.H.I.E.L.D. agent from the Marvel comics that is very skilled with a bow and arrow. Now before you start thinking “Oh, she only likes Jeremy Renner” that is not true. I have read several comic books with Hawkeye and I’ve also watched the Avengers cartoon.

I will admit that my interest did start because of the movie. I’m actually not quite sure how I became a fan though. I’ve gone back and looked at Facebook posts and tweets and there’s no evidence to showing how it began. The earliest thing I found was back in February of 2012 where I reference my excitement at seeing a trailer and then used a Hawkeye hashtag.

Now to be fair, I am a big fan of characters that are archers. Legolas, Katniss, Merida, Robin Hood. Heck I even got excited during the beginning of The Dark Knight Rises and Bruce Wayne pulls out a bow and arrow for a brief shot.  Because I’d like to do that myself one day.  With the archery lessons I am supposed to have. You know. One day.

With that in mind, when the trailers for the Avengers movie came out I had NOT yet seen Thor at the time. And while I do enjoy a good Renner flick, he’s not my main reason for watching a movie.  Therefore there isn’t really a logical explanation as to why I was so excited to see him in the movie.  Perhaps maybe because he was a smaller character and I was happy for that?

Anyways my fandom grew and after watching his cameo in Thor, I was very excited at seeing him in the movie. When he makes his first appearance in the Avengers, I audibly cheered in the theater. Then to my horror, they made him into a bad guy almost immediately.  Though now when I think about it, Hawkeye and Loki together is the ultimate dream team. And did you know that Hawkeye’s total screen time only equals to about 12 minutes? And that they had a girl beat him up? Regardless of all that, I very much enjoyed Renner’s performance in the movie. He has a few good lines and some really excellent archery action scenes. The one where he shoots the arrow perfectly WITHOUT LOOKING is a favorite. So much that I would actually be ok with a Black Widow/Hawkeye movie to explore their backstory because there really should be one to explain their characters’ chemistry. This is important because I’m not a Scarlet fan but I am willing to put that aside if this movie ever got made.

The thing with Hawkeye is that he’s not a superhero because of magical powers or super serum or freak accidents or high tech machinery. He’s just extremely skilled in prime peak condition and is REALLY good at what he does.  So that actually makes him more dangerous, at least in my opinion. 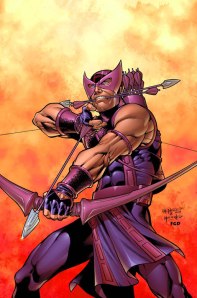 I’m excited because Joss Whedon has confirmed that there will be more Hawkeye in the upcoming Avengers sequel. I’m a little disappointed because he’s not showing up in any other movie before then (as far as I know). I hope that Barton gets more mention the Agents of S.H.I.E.L.D. tv show because he actually IS a S.H.I.E.L.D agent and even if Renner doesn’t actually show up, the character should be mentioned more.

Now for the record, I do not have the same affections for Green Arrow from DC Comics. I have not watched the show and I am mostly unfamiliar with his story. Though I will say he does intrigue me with the archery and I will probably want to learn more in the future.

I get a lot of good natured teasing from my friends. All the jokes about him, I’ve heard. I’ve been sent things from the Hawkeye Initiative so many times. (Google it) I’ve had comics pasted on Facebook wall. I just shake my head.

But I know they love me because my Christmas and birthday presents have shown my friends going out of their way to get me things that feature Hawkeye. And it really is quite hard to find Avengers things with him in it as a lot of the marketing focuses on The Big Four (sometimes they even leave Hulk out). So when I receive something that has him in it, I know the time and energy spent trying to find it and it makes me love my friends even more as they help to enable the fangirl. It’s been joked that whoever I end up dating is going to be called Hawkeye for a while. Well, hope whoever that will be is ok with that….